Things falling apart is a kind of testing and also a kind of healing. The truth is that things don’t really get solved. They come together and they fall apart. Then they come together again and fall apart again. It’s just like that. The healing comes from letting there be room for all of this to happen; room for grief, for relief, for misery, for joy.” —Pema Chodron

We made the drive for Mother’s Day, my sisters and I. We were going to take her out for a nice dinner. We knew there would not be too many more Mother’s Days with her in our future. We arrived in town and called her, she was at the hospital. She was in the emergency room and before the afternoon was over she was in ICU. The nurses taught us the drill, wash your hands, put on the rubber gloves, put on the face mask, no visitors except family. She slept mostly, except when they came in to poke her with a needle. So many needles. So many bags of fluid. So much blood being drawn. So many different nurses. We tried to stay out of the way. We sat at the foot of the bed. We tried to blend into the wallpaper as doctors came and went. Because we were also dealing with him and he was confused and when he was confused he was angry. So we let the professionals talk to him, to calm him, to explain to him, to help him try and make sense of all the bags, all the blood, all the needles. We, the sisters, the granddaughters, the womenfolk sat at the back of the room, laughing occasionally, behind our masks, with our rubber gloves on….like we were going to catch death or in this case, like she was going to catch life. It was all absurd. It was all surreal. Mostly though, I watched the monitor, the monitor at the head of the bed. Three lines, rising and falling: her heart, her respiration, her saturation. I watched the numbers rising and suddenly falling, beating out time. The end of time. “You can’t die in a hospital anymore, they won’t let you,” I thought to myself. There is always something else they can poke you with to keep those waves cresting. And at night, after he left, I moved closer. I fell into breathing along with her. I dozed and I remembered. There were so many things I wanted to tell her in the silence, but only two did she seem to understand. “You were a good mom and we will take care of “him.” And she would respond with one word- “Really?” Until one morning she woke up and told me to skedaddle.

Things fell apart quickly after that for all of us….he did, then she did, then she was gone, then finally, I fell apart. Grief is funny that way. It takes a while. Yet, life goes on. The sun rises and sets. People need to be fed. Lawns need to be watered. Dogs need to be walked. The moon quarters, halves, gibbous and fulls… and your heart does too. But a grayness settles in and you slow down while life speeds by. Tears fall at the strangest times and you yearn for a mask. And you can’t find your words. You fall asleep with grief under your pillow and in the morning it is still there. You want to blend into the wall paper to disappear and you want to shout, “Hey does anyone know I am here!”

The phone rang early in the morning, before the sun was up, in the middle of a meteor shower. “She needs you can you please come.” I hadn’t planned on being there for the birth of my new granddaughter, but of course I wanted to be. I hurried to the car and raced to the hospital and a large meteor streaked across the sky, just as it was turning pink in the East and Venus was rising. Soft music filled the room and calming voices reminded her to breathe. The contractions were coming regularly now, one followed another, breathe, relax, rub her back, wipe her brow. The hours passed. The pain was intense. Pain that was going nowhere. We moved her, this was not going as planned. Doctors and nurses surrounded the bed. I looked in her face and reminded her to breathe. I looked at the monitor. Three lines, going up and down in so many different directions. Three lines assured me this was labor, hard labor and the baby was still o.k. Finally, she slept and they became more stable. The lines began to look like waves not an erratic stock market. I sat quietly at the end of the bed as she slept. A bed now holding a very young mother. A bed ready to usher in life not to usher it out. We spoke in whispers the nurses and I, we listened to the regular beat of the monitor. This time her he was also next to her, this time he was sweet and loving and attentive. So much the same—so much different. The sun set outside the window and the lights came on. Finally, just like death, a threshold opens, a crowning, blood and water, tears and pain, silence and moaning. But this time the end brought unspeakable joy.

And then things began to come together—a baby, happiness, new life. We swaddle her in love. And as the days and the weeks have passed we have spent time together under the trees, watching the sun rise, seeing her first smiles. The seasons are beginning to change. Today there is calm. Nothing has been solved, but I have grown. There is room for it all, the healing and the grief. 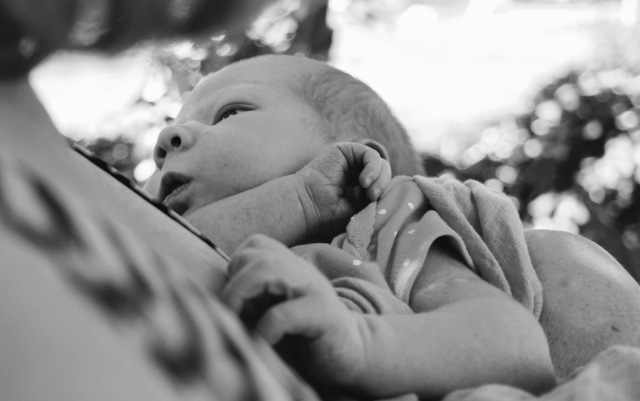